Posted by Brent Patterson on November 3, 2014  Tagged with: fracking 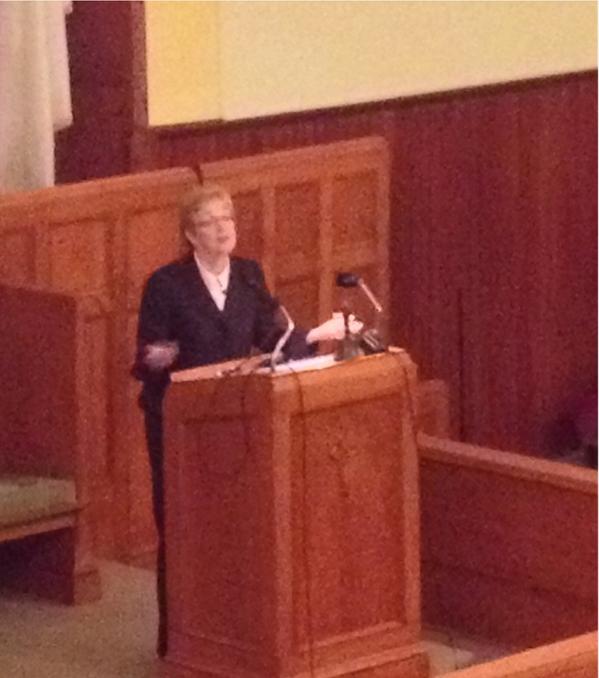 Barlow speaking in Corning, New York on October 18. Twitter photo by People for a Healthy Environment.

DC Bureau reports, "Corporations and municipalities [in New Yorks state] are now trying to lock in rights to withdraw water and in some cases sell water to the highest bidder, and they do not want environmental reviews to slow them down." Shell wants water for its fracking operations and "the state Conference of Mayors and Municipal Officers says its members deserve unfettered rights to cash in on water sales — even water exports for fracking in other states."

It would appear that the New York state government is cooperating with their agenda.

"Under a 2011 state law, long-time users with the capacity to withdraw at least 100,000 gallons per day are required to obtain state permits for the first time. The permits are free, and the state Department of Environmental Conservation [DEC] has decided to issue them to applicants at their highest reported level of usage without any environmental review."

Barlow comments, “It is an extremely dangerous practice to allow the commercial sale of public water and sets a precedent for the commodification of our water supplies. Water is a public trust, in law and in practice. When fracking or other private interests get the green light to buy water, the nature of this public trust is violated.”

A feature article highlights the story of the village of Painted Posted, which is located about 5 kilometres west of Corning.

"In 2012 the village signed a five-year deal reportedly worth up to $20 million with [SWEPI LP] a subsidiary of Royal Dutch Shell to sell up to 1 million gallons a day used to frack Shell’s natural gas wells in Pennsylvania. ...[In March 2013], Rochester state Supreme Court Judge Kenneth R. Fisher ruled ... that the village had attempted to 'short-circuit' the environmental review process mandated by the state’s SEQRA [State Environmental Quality Review Act] law. He banned further water sales to Shell, pending such a review. ...[His] decision halted the trains that the Shell subsidiary ... had been running from a specially built new siding in Painted Post to gas drilling sites in Tioga County, Pa., where officials have expressed deep concern about local water shortages."

"Painted Post holds a state permit that allows it to withdraw up to 4 million gallons of water a day, well over 10 times what it actually uses. ...The village has argued that the water it could — but does not — withdraw is 'surplus property'. In his order halting the water trains, Judge Fisher rejected that notion, writing: 'A large volume daily withdrawal of a resource vital to the well being of our state is not a mere surplus sale of village property akin to selling a bus or a fire engine no longer needed by the village.'"

But, "Fisher’s injunction was promptly challenged by Shell and overturned. The water trains got the green light to roll again in April 2014 after a unanimous five-judge panel of mid-level appellate judges reversed Fisher on the grounds that [the plaintiff] never had legal standing to sue. The water trains have been operating sporadically ever since."

The article notes, "Fracking a single natural gas well requires 3-4 million gallons of water. SWEPI has drilled dozens of gas wells in Pennsylvania, where it owns some 900,000 acres and recently acquired 155,000 more in Tioga and Potter counties to tap the Marcellus and Utica shales."

Barlow cautions, “Groundwater takings are doubling around the world every 20 years and in many places are becoming seriously compromised. Water is being pumped faster than it can be replenished. The Ogallala aquifer (in the U.S. Midwest) will be ‘gone’ in our lifetime, says the U.S. Department of Agriculture, killed by hundreds of thousands of bore wells mercilessly pumping the source. Is this the future for the Finger Lakes?”

Barlow in solidarity with Basarwa against fracking

Canada to ‘assist’ Mexico with ‘regulations’ on fracking