Posted by Meera Karunananthan on December 4, 2019 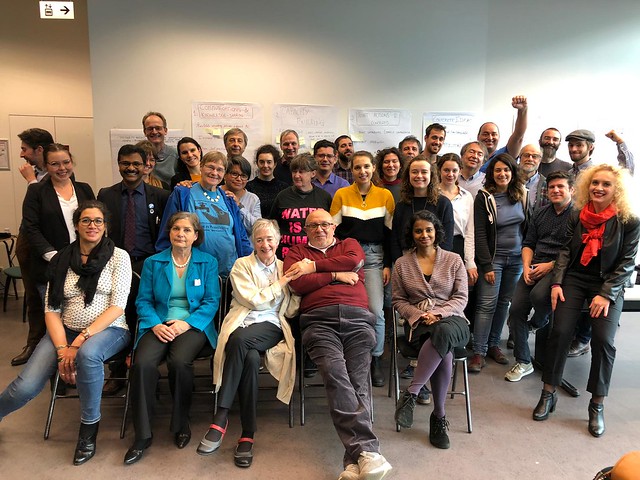 I have just returned from Brussels where we wrapped up the first European Blue Communities meeting, co-sponsored by the Blue Planet Project, the European Federation of Public Service Unions, the World Council of Churches, the Swiss Reform Church and Brussels Capital Region, our newest Blue Community.

The meeting brought together representatives from more than 40 organizations across Europe involved in the Blue Communities Project. We were also joined by Marcela Olivera from Bolivia and Samuel Ventura from El Salvador who are leading a new Blue Communities initiative in Latin America through the Plataforma de Acuerdos Publicos-Comunitarios – a network of rural community water cooperatives.

The Brussels Capital Region, representing 19 municipalities including the City of Brussels, agreed to co-sponsor the European Blue Communities meeting after voting to become a Blue Community earlier this year. We also received the support of the local public water operator Vivaqua, who let us use their beautiful meeting spaces for the historic event.

To become a Blue Community, a local government or public institution must officially recognize water and sanitation as a human right, promote public water and wastewater services and phase out the sale of bottled water at municipal events. Brussels’ journey to becoming a Blue Community started in March 2018 by a group of IHECS students as part of a school project. The students, Aurélien De Bolster, Gabriel DeTheux, Martha Vandermeulen, Alexandre Van Hoek, Simon Verhoye and Lea Vromann were working on a school project related to water when they discovered the Blue Communities Project. Since then, the Blue Planet Project has supported their campaign together with our allies at the European Federation of Public Services Unions and Food and Water Europe. You can learn more about the journey of these students and their work to make Brussels a Blue Community here.

At a press conference on Friday, November 29, Minister-President Rudi Vervoort made an exciting announcement: as part of its commitment to becoming a Blue Community, the Regional government would re-municipalize sanitation services, which are currently provided through a P3. Minister-President Vervoort also committed to ban bottled water sales in all municipal facilities and events, and improve access to water by installing more public fountains.

A representative of Vivaqua, Jonathan Biermann acknowledged that water shut-offs were currently a problem and that the water utility would work to ensure people are not denied access to drinking water due to their inability to pay. The citizen’s advocacy organization formed by the IHECS students who began the campaign, Brussels Blue Community, would like to see the operator take this commitment further by putting an end to all shut-off and pledged to continue the discussions with public officials in order to make this happen. 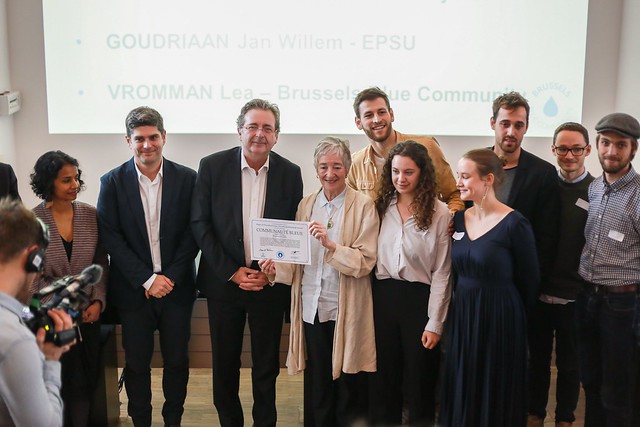 I was so pleased to be able to celebrate this important step with Council of Canadians Honorary Chairperson Maude Barlow, who presented the Blue Communities certificate to Minister-President Vervoort.

The Blue Planet Project congratulates Brussels Capital Region and the team at Brussels Blue Community for their tremendous efforts.