Posted by Brent Patterson on February 7, 2012  Tagged with: Canada, Mining and Dams 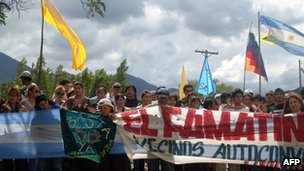 Mexico City-based Blue Planet Project organizer Claudia Campero Arena notes that Montreal-based Osisko mining corporation’s proposed Famatina gold mine project in Argentina has been stopped due to widespread concern over water consumption and pollution. Protests against the proposed mine included a demonstration of more than 300 people in front of the Canadian embassy in Buenos Aires.

Macleans magazine reports, “In the face of intense local opposition, Canadian gold mining company Osisko has suspended a proposed project in Argentina’s western La Rioja province. The ‘Famatina project’, which the company insists is still in its speculative phase, had met with resistance from environmentalists who complained it woud require millions of liters of water per day and the use of cyanide to access and extract precious metals. On Jan. 2, protesters blockaded a dirt road leading into the mountainous Famatina area, stopping anyone affiliated with Osisko, but allowing tourists and locals to freely pass by. They were joined by hundreds of people who held solidarity protests outside the Canadian embassy against the project in Buenos Aires.”

Aljazeera adds, “Environmental groups and residents in the town of Famatina say an open pit goldmine by mining company Osisko would pollute the local water supply near the proposed site. …Residents in Famatina fear the mine would take, and possibly contaminate, the water supply. ‘Water is worth more than gold,’ read one sign, a reference to its scarcity in the arid region. The 800-person strong protests, along with similar protests in Peru, El Salvador, and Chile, where local communities demanded their interests take precedence over those of mainly foreign mining companies, forced Osisko to suspend exploration plans in Famatina for the time being.”

And the Latin American Herald Tribune notes, “Montreal-based Osisko will use 1 million liters (265,000 gallons) of water per day and tons of cyanide to extract gold, silver, copper and other minerals, drying up wells and polluting the environment in the Famatina region, the protesters say.”

The Council of Canadians will be organizing a ‘Shout Out for Mining Justice’ this June 1-3 in Vancouver. More details on this conference will be available soon. For more on ‘Water and mining in Latin America’, please see our campaign web-page at http://canadians.org/mining.