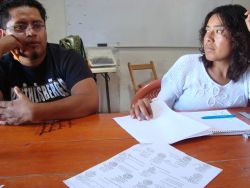 Bernardo Vásquez Sánchez and his cousin Rosalinda Dionicio Sánchez who was wounded. Photo by Dawn Paley.

Proyecto Ambulante reports, “At approximately 21:00 (on March 15), Bernardo Vásquez Sánchez was murdered. He was an activist against Fortuna Silver’s mine in San José Progreso, Oaxaca, and a member of the Coordinating Committee of the United Villages of the Ocotlan Valley. The killing took place at the entrance to Santa Lucia Ocotlan, where he was ambushed together with his companions Rosalinda Dionicio Sánchez, and Arturo Vásquez Sánchez (Bernardo’s brother). It is not yet known who the perpetrators were, but his companions, who were badly wounded, assumed that they were people who politically opposed him. On January 19th, 2012, Vásquez Sánchez said that San José’s town councilor ordered municipal police to fire at people protesting the laying of (water) pipes leading to Fortuna’s mine, leaving two wounded, one of the two, Bernardo Méndez Vásquez, died from his wounds.”

Dawn Paley of the Vancouver Media Co-op wrote immediately following the news, “Bernardo Vasquez Sanchez was a clear spoken Zapotec activist, a brother, son, and cousin, who dared to stand up against a mining project in the territory of his people. He was well aware that a paramilitary group was operating in San José Progreso, Oaxaca, and that it was organized to snuff out opposition to a gold mine, owned by Vancouver based Fortuna Silver. …Though there’s few details, one thing is clear: this was a political hit. Bernardo was murdered because he dared to speak out…”

Lainformacion.com reports (in Spanish), “The Collective Defense of Oaxaca in the Territories, composed of seven NGOs, blamed the company Cuzcatlán (Vancouver-based Fortuna Silver) and the mayor of the Oaxacan community of San José del Progreso, Mauro Alberto Sanchez, for Vasquez’s death and that of another activist, Bernardo Mendez Vasquez, who was murdered in January.”

Yesterday the Council of Canadians posted this statement:

The Council of Canadians has just learned that right to water activist Bernardo Vásquez Sánchez has been murdered in San Jose del Progreso, Mexico. Vásquez Sánchez had been an outspoken opponent of Vancouver-based Fortuna Silver’s gold and silver mine just south of Oaxaca City.

The mine has raised serious concerns about water protection. Earlier this year, local residents refused to allow a new water system to be installed on their land because they believed it would be used to supply the mine with water.

We demand that the Canadian government call on Mexican authorities to ensure that there is a thorough and transparent investigation of the murder of Vásquez Sánchez. Furthermore, we join with the community of San Jose del Progreso in their demand that Fortuna Silver’s mine, which has been in operation since September 2011, be closed.

We express our deepest sympathies to the Vásquez Sánchez family for their loss. We mourn with them.