Posted by Brent Patterson on October 24, 2014  Tagged with: Right to Water, UN 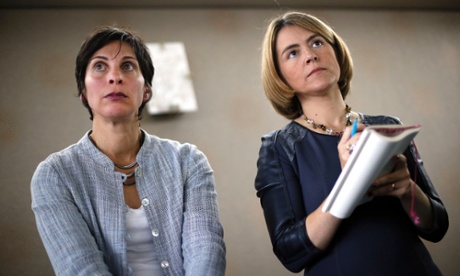 Farha and de Albuquerque in Detroit. Photo by AP.

On June 18, the Blue Planet Project and its allies submitted a report to Catarina de Albuquerque, the United Nations special rapporteur on the human right to drinking water and sanitation, urging her to take action to help restore water services to the thousands of Detroit residents who had their water turned off by the city due to unpaid bills and to stop further service disconnections.

Within a week, de Albuquerque, Leilani Farha, the UN special rapporteur on the right to adequate housing, and Philip Alston, the expert on extreme poverty and human rights, stated, "Disconnection of water services because of failure to pay due to lack of means constitutes a violation of the human right to water and other international human rights."

Within four months, on October 19-20, de Albuquerque and Farha visited Detroit to observe the situation first-hand.

At the conclusion of their visit, de Albuquerque stated, “It is contrary to human rights to disconnect water from people who simply do not have the means to pay their bills. I heard testimonies from poor, African American residents of Detroit who were forced to make impossible choices – to pay the water bill or to pay their rent. ...In practice, people have no means to prove the errors and hence the bills are impossible to challenge. ...The indignity suffered by people whose water was disconnected is unacceptable.”

Farha highlighted, "Every effort should be made by all levels of government to ensure that the most vulnerable are not evicted from or lose their housing as a result of water shut-offs or water bill arrears. ...Where an individual or family is rendered homeless due to water shut-offs, the City of Detroit must have in place emergency services to ensure alternate accommodation with running water is available."

Michigan Radio reported, "[De Albuquerque] says Detroit’s water shutoffs amount to a violation of basic human rights that falls heaviest on poor and African-Americans. De Albuquerque says the city’s plan to help people pay their delinquent water bills falls short. ...She adds that Detroit’s bankruptcy is no excuse for failing to provide the water people need to drink, prepare food, and for basic hygiene." The Associated Press quotes de Albuquerque commenting, "If the city does not have enough money then other levels of government have to step in to support."

Both special rapporteurs concluded that Detroit must restore water services to its citizens who are unable to pay their bills and that a failure to do so would be a violation of the most basic human rights.

Blue Planet Project founder Maude Barlow, who served as Senior Advisor on the right to water to the 63rd President of the UN General Assembly in 2008-2009, has stated, "It is crucial that what is happening in Detroit - and in other cities, not only in the global South but in Europe and the U.S. - be named as what it is: a clear violation of the most basic human right, the right to water for life."

The Council of Canadians organized a solidarity convoy to deliver a symbolic amount of water from Canada to Detroit this past July 24. We are now considering a second delegation to Detroit to continue the pressure on all levels of government to take action. More on that soon.